San Pedro offers socially distant fun around every corner, and it starts at home. 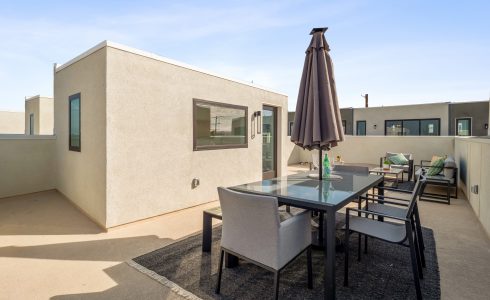 The entertainment options are endless in San Pedro and at its premier new-home community, 24 on Centre, and you can enjoy both while remaining safe and socially distant. But act fast if you want to own one of these great new single-family homes. Only a few residences remain, priced from $870,000, so schedule an appointment to tour the community and its quick move-in homes now.

Want to host friends and enjoy your new home while observing smart COVID-19 recommendations? It doesn’t get better than being able to spread out on your rooftop deck and drink in the incredible coastal views. Want to explore the charming seaside environs? The very best of South Bay living is waiting for you at 24 on Centre. Walk to nearby eateries for patio dining with an ocean breeze. Zip in and out of neighborhood shops or take a fitness class and get in a few more steps on the short walk back home.

The San Pedro waterfront is one of the hottest developments in all of Sothern California and Williams Homes is one of the hottest homebuilders in the west, so it’s no surprise the spectacular location and investment potential of 24 on Centre has been driving sales. The community is just a few blocks from all the action and the newly renamed West Harbor, which will now feature famous seafood restaurant Gladstone’s, it was just announced.

“The 48-year-old oceanside restaurant is most famous for its massive patio overlooking the Pacific up in Malibu,” said Eater. “This new San Pedro outpost of Gladstone’s actually shares the same owners as the Long Beach version, and comes complete with lots of seafood and those same water views.”

Per Eater, West Harbor will also feature additional restaurants from well-known chefs including “Greg Morena, who already runs Pappy’s Seafood and the Albright, located along the pier in Santa Monica, and “Robert Bell, most famously known for the recently-closed Chez Melange in Redondo Beach. A brewery and beer garden are in the works as well.”

There will be almost 35,000 square feet of waterfront dining at completion, as well as a large amphitheater and a dockside cruise and water taxi area. West Harbor is set to break ground in 2021. In addition, AltaSea, a 23-acre, public-private ocean institute and marine research facility, is underway nearby. Also nearby are the iconic Korean Bell of Friendship, the Cabrillo Marine Aquarium, and Cabrillo Beach, and 24 on Centre’s convenient location also make commuting to Downtown L.A., Long Beach, or anywhere in the South Bay a breeze.

24 on Centre offers modern homes with open floorplans revealing 3 to 4 bedrooms and 3.5 bathrooms in 2,030 to 2,126 square feet. Coveted features include expansive island kitchens that are wide open to great rooms and dining rooms, flex rooms (per plan), luxe master suites, attached two-car garages, and, of course, those expansive rooftop decks featuring breathtaking views of the ocean and harbor.

For more information, visit Williams Homes. This renowned builder was founded in 1997 on the principles of integrity, trust, and partnership and has continued to thrive as one of the state’s fastest-growing homebuilders. Williams Homes was the proud recipient of the 2013 Builder of the Year Award by the Building Industry Association.